This summer our Institute for Automation and Control Engineering provided an internship for one month. The Austrian Research Promotion Agency (FFG) sponsored the internship in the course of which four high school students pursue their interest in natural science and technology. The internship started with a join discussion and reflection on various applications for mobile robots. The final presentation of the internship was held on Friday, 04.08.2017. There, the high school students presented four different tasks for mobile robots:

Autonomous distance control of a robot to an in front driving robot. Due to use of a laser scanner, the virtually coupled robot can follow the robot in front also within curves.

Simple robot control method by hand moves. A down looking camera captures an optical marker that is fixed on the back of one’s hand. The captured position of the optical marker is translated into steering commands for the robot (e.g. forward, backward + right, stop …).

3)Autonomous navigation through a labyrinth

By detecting the environment with a laser scanner, a sophisticated algorithm provides the robot to navigate through the labyrinth. Therefore, the distance to the left wall is controlled to be a constant value. This enables the robot to drive straight forward and to turn left. For making right turns possible, the control algorithms switches for a short time to hold the right distance to a constant values.

4)Robot navigation by tracking a line

The robot follows a line on the floor. A down looking camera mounted on the robot captures the line. The designed control algorithm keeps the line in the middle of the picture and drives forward. When the camera does not detect any line, the robot stops automatically.

Beside the theoretic approaches, the trainees also implemented all four algorithms on the robots. At the final presentation, the audience was invited to test the robot algorithms. We wish our trainees all the best for their future and proudly announce that the project results are also presented at the „long night of research“ on Friday, 20.04.2018. 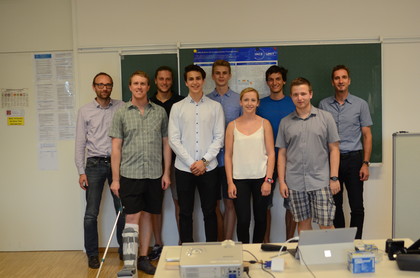